Researchers have found ipRGCs to be selectively spared in certain ocular diseases, but selectively targeted in other retinal conditions. There are differences between classical photoreceptors and ipRGCs, such as peak sensitivity to short-wavelength blue light. 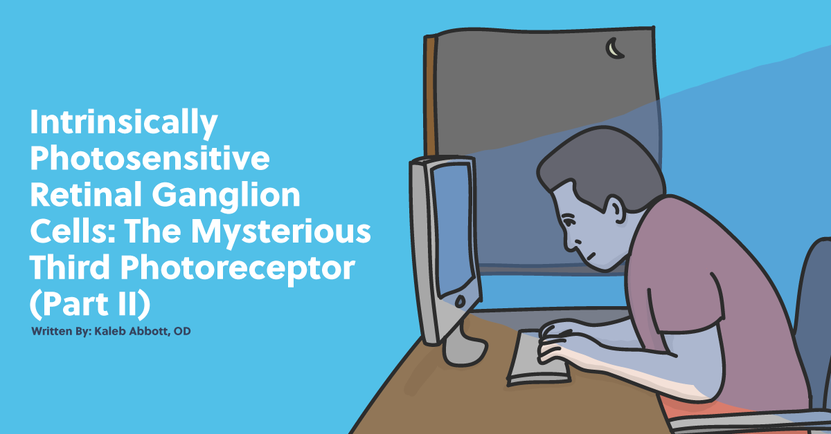 In Part 1, we discussed anatomical and physiological differentiations between intrinsically photosensitive retinal ganglion cells (ipRGCs) and classical photoreceptors (rods and cones). In case you missed it, here is a brief overview. 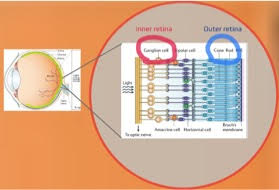 IpRGCs are the only photoreceptors located in the inner retina. Axonal projections of ipRGCs include the lateral geniculate nucleus, superior colliculus, and pretectal nucleus and also non-image forming brain areas such as the suprachiasmatic nucleus, amygdala, preoptic nucleus, lateral habenula, intergeniculate leaflet, and hypothalamus. 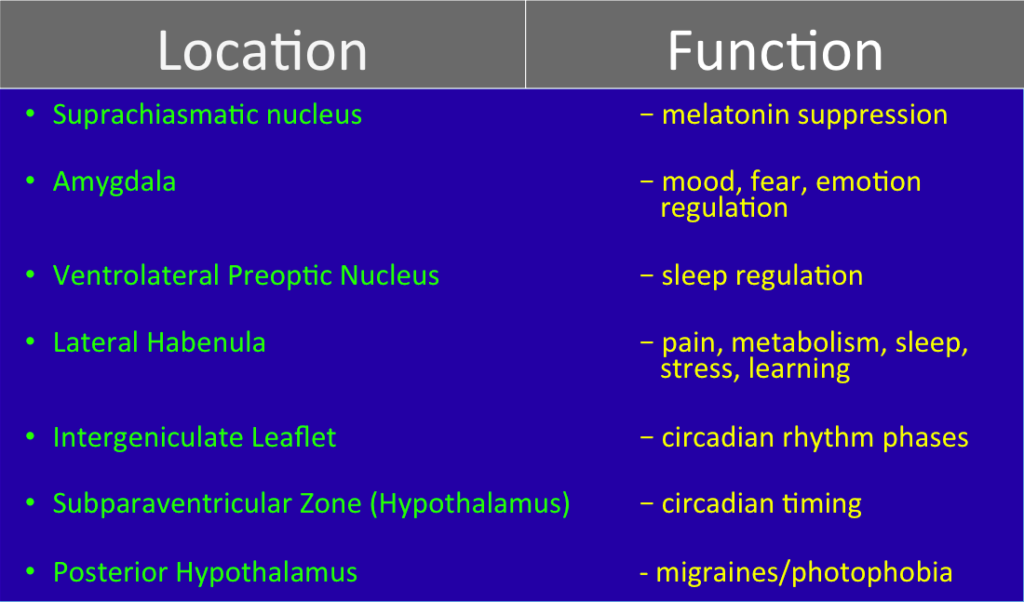 Functionally, ipRGCs provide distinct roles such as pupil size control, motion detection, brightness and contrast sensitivity, but, most notably, photophobia and circadian rhythm modulation. These non-image forming roles of ipRGCs have profound clinical implications, which can dramatically impact our patients, yet are oftentimes vastly ignored or simply misunderstood by eye care professionals.

Have you been hearing the incessant and dramatic mentioning of blue light ruining our lives? Are you one of the practitioners convinced that blue light is the “boogeyman” of the eye care world? Does this sound reminiscent of the 1980s? 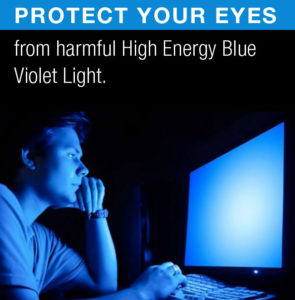 The resurgence of the “harmful” blue light discussion emerged from the discovery of the ipRGC in the early 2000s because these photoreceptors are stimulated almost exclusively by blue light (peak sensitivity of ~482 nm). There are only approximately 3000 of these photoreceptors in the human eye, yet there are believed to be at least 5 subtypes of ipRGCs. For comparison, there are roughly 120 million rods and 6-7 million cones in a human eye.

Unlike rods and cones, ipRGCs depolarize in response to light and have unmyelinated axons. IpRGCs are concentrated parafoveally, but have massive dendrites spanning the entire retina, which allow them to be overall irradiance detectors even with astonishingly low photoreceptor density. Strangely, ipRGCs are stimulated intrinsically through melanopsin, but also extrinsically through rod and cone pathways.

For reasons not understood, researchers have found ipRGCs to be selectively spared in certain ocular diseases, but selectively targeted in other retinal conditions. This highlights a few more differentiating characteristics between classical photoreceptors and ipRGCs; most notably, one such characteristic is ipRGC peak sensitivity to short-wavelength blue light.

When it comes to photophobia, ipRGCs may sometimes be the culprit. Photophobia may occur due to axonal projections of the ipRGCs to the posterior hypothalamus which is responsible for migraines and photophobia. While blue light stimulates ipRGCs, this does not mean harsh blue light should always result in light sensitivity. Short-wavelength driven photophobia may occur for two reasons: damaged or over-stimulated ipRGCs. 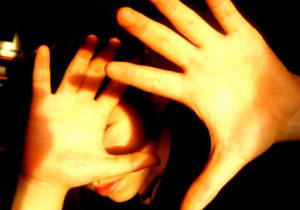 Damaged ipRGCs may occur when either the retinal ganglion layer or visual pathway is damaged, such as in cases of glaucoma, neurodegenerative disease, traumatic brain injury (TBI), and even AMD. Damage to ipRGCs or other brain areas may increase ipRGC sensitivity. IpRGC stimulation is known to exacerbate migraines in persons with up-regulated ipRGC sensitivity.

In our technological age, over-stimulation of ipRGCs occurs frequently, which may lead to headaches and eye discomfort. Common sources of over-stimulation include excessive screen time (computers, iPads, phones, TVs) and harsh overhead LED lighting that emits high levels of blue light. Humans are now exposed to greater indoor intensity and longer duration of short-wavelength light than in recent history. Such increased exposure may result in more of our patients reporting asthenopia than in previous generations.

Perhaps the most fascinating role of ipRGCs lies in their ability to govern circadian rhythm. Stimulation of ipRGCs signal to the suprachiasmatic nucleus then eventually to the pineal gland, which inhibits melatonin release. While our ancestral societies had minimal exposure to blue light outside of sunlight, modern day societies are continually exposed to blue light before sunrise and after sunset. 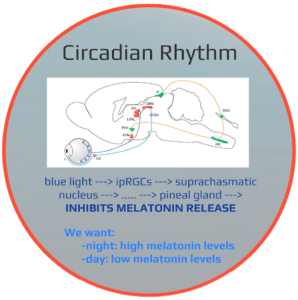 Interestingly, when ipRGCs were finally discovered, researchers were able to understand why some mice blinded by outer retinal disease had normal sleep/wake cycles, yet other mice with inner retinal conditions had abnormal sleep/wake cycles. The location of ipRGCs is critical to understanding why specific symptoms occur in patients with retinal conditions.

What to do about blue light? 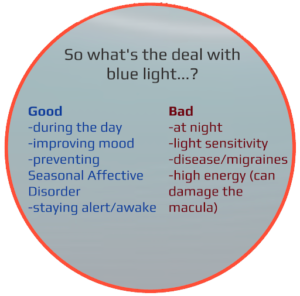 There are times when our patients benefit from this short-wavelength light. During waking hours, blue light decreases melatonin levels, which results in increased alertness. Short-wavelength stimulation may also improve mood, help regulate emotions, and mitigate symptoms of seasonal affective disorder.

The question is, how long before bedtime should blue light be reduced? My research study blocked short-wavelength light in subjects 3 hours before bedtime and demonstrated a 50% increase in melatonin levels and significantly improved sleep quality. Other studies yielded similar results with only 1-2 hours of attenuated blue light exposure.

The opposite question also can be asked; what happens if I use my blue light emitting phone only 30 minutes before bedtime? Short periods, such as 30 minutes, of blue light exposure may not impact sleep metrics, but there is still inadequate research to indicate this. Foremost, know that using computers, phones, and TV for a few hours before bedtime without mitigating this short-wavelength light exposure to the eyes will negatively impact sleep.

Note the fact that blue light exposure after sunset is unnatural — this did not occur until humans utilized electricity and was still scarce until the creation of artificial light sources such as LEDs. For patients with serious sleep disorders, consider completely blocking blue light with yellow/orange tinted glasses. The rest of us should still attempt to reduce short-wavelength light exposure in the evenings.

For patients with photophobia, TBIs, concussions, neurodegenerative disorders, AMD, inner retinal conditions, extensive computer usage, or simply those prone to migraines/headaches, blocking blue light during the day may also be helpful as it may reduce asthenopia. Remember, you don’t have to block 100% of this short-wavelength light. Photoreceptor stimulation peaks at a particular nanometer, but it is still a bell curve.

Consider a selective blue blocking lens coating for these patients, rather than a full yellow/orange tinted lens which would eliminate approximately 99% of blue light. Remember, if you block too much blue light during the day, you may cause decreased alertness and poorly regulated sleep/wake cycles. 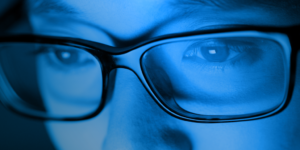 On another note, there is currently significant discussion questioning whether short-wavelength light, being of higher energy than long-wavelength light, can damage the macula, especially when originating from computers. There is currently no definitive proof that this short-wavelength light damages the macula and studies indicate that such damage is unlikely. However, we are entering a time in human history when our indoor blue light intensity and duration of exposure has increased dramatically. As of now, there are no long-term studies completed demonstrating how this cumulative exposure over decades may affect retinal health, but it is unlikely that such blue light will damage the retina.

How should this knowledge generally affect your patient care? 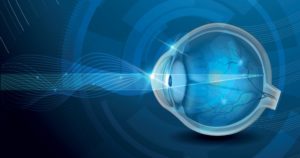 With what patients should you consider blue light education or treatment options?

Discovering and better understanding ipRGCs has shed new light on the impact of modern-day blue light exposure. Blue light is either vilified or ignored in the eye care community, and both cases may lead to poor patient care. Many practitioners do not realize the extent to which ipRGCs affect their patients and therefore do not address the aftermath of problems stemming from ipRGC over or under stimulation. Understanding the differences between classical photoreceptors and ipRGCs, in my opinion, is paramount to grasping the good and bad effects of blue light. IpRGCs should be immediately thought of in cases of circadian rhythm dysfunction and long-standing photophobia. With an enhanced grasp of ipRGCs, eye care practitioners can provide better patient care through education and proper blue light blocking approaches. 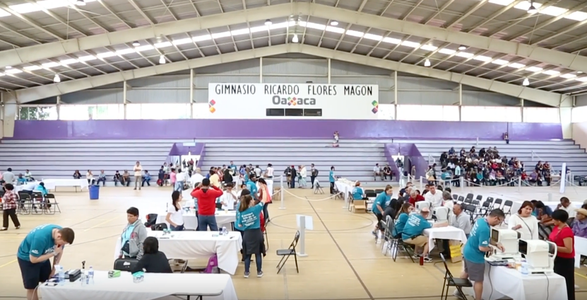 Stem Cells and Eyes - What role will they play in eyecare? 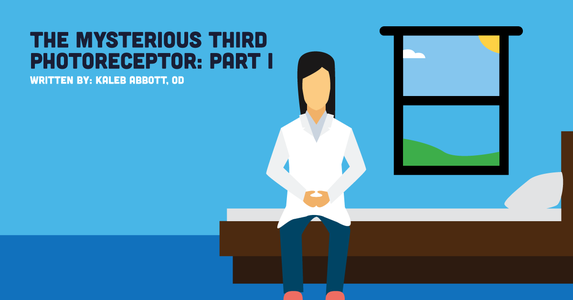