The OD's Guide to Ocular Antibiotics

When it comes to treating and managing ocular disease, antibiotics are one group of the many medications in the optometrist's toolkit. Here's your cheat sheet for keeping track of the big ones! 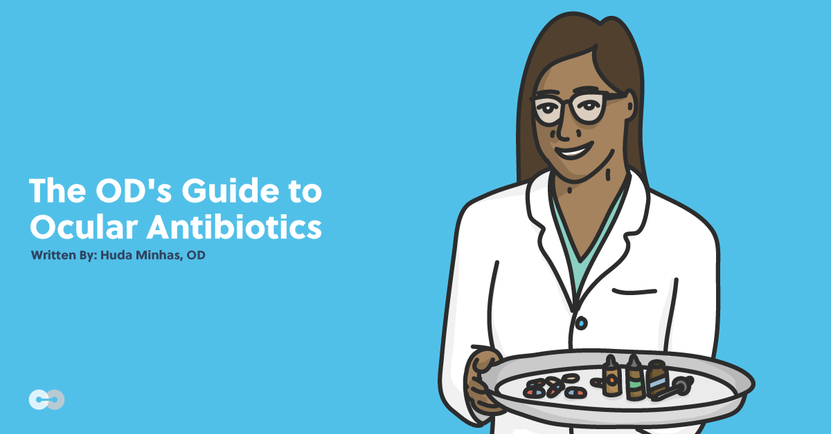 There are several classes of topical and oral antibiotics available in the treatment and management of ocular disease. As optometrists, we often need these medications for lid and ocular surface conditions. This review will only focus on antibiotics from an ophthalmic point of view, and does not list all types. This article will not review drug mechanisms.

But let’s start from the beginning! There’s a few things that need to be reviewed before diving deeper into the various kinds of antibiotics and their profiles.

Bacteriostatic: agents that ARREST growth and replication of bacteria, limiting spread while our immune system does the work

Narrow: single or limited group of organisms. Used when you know what kind of bacteria you’re dealing with.

Broad: effective against gram (+) and (-) microorganisms

Want more of this? Check out our downloadable clinical cheat sheets!

Gram positive bacteria are the most common cause of ocular bacterial infections. Staphylococcus aureus, coagulase negative staphylococci, streptococcus pneumoniae, and pseudomonas aeruginosa are leading isolates. Here’s a table that lists some bacteria that we may see in clinic:

In relation to their diagnosis, here’s some of the common pathogens related to their condition:

Remember “FAT PAC” for pregnant women - Never use FAT (fluoroquinolones, aminoglycosides, and tetracyclines). You can use PAC (penicillins, azithromycin, and cephalosporin).

These are the most common oral ocular antibiotics prescribed as they are effective bactericidal agents for infections around the ocular adnexa. When treating eyelid infections, it is important to use a penicillinase-resistant penicillin since bacteria produce an enzyme called penicillinase which renders penicillin ineffective. These drugs work great against S. aureus. Dicloxacillin, for example, is dosed at 125mg qid for mild to moderate cases, or 250mg qid for severe infections.

There are several synthetic derivatives with a broad spectrum of coverage that we are familiar with as well - amoxicillin, for example! Amoxicillin is categorized under aminopenicillins - this class is active against gram-negative rods (such as E. coli and H. influenzae). Amoxicillin is useful for treating periocular infections (preseptal cellulitis, orbital cellulitis, and dacryocystitis). But, in order to make it penicillinase-resistant, it is combined with clavulanic acid to make Augmentin. A typical dose would be 500mg q12h. For more serious infections, it is dosed q8h.

Cephalosporins are also bactericidal and similar in structure to penicillins (they share a b-lactam ring which means there’s a possibility of cross-reactivity between these two compounds!) So, if a patient has a true anaphylactic reaction to penicillins, we do not prescribe cephalosporins. This class of medication is also used commonly in eyelid infections. They are classified in generations with effective coverage against gram-positive bacterium such as S. aureus and S. epidermidis. Higher generations have expanded coverage for gram-negatives. The following table will classify them further:

One of the most commonly prescribed cephalosporin is cephalexin (Keflex) for infectious eyelid conditions such as internal hordeolum and mild preseptal cellulitis, typically at 500mg bid for a week. For more severe infections, you can prescribe it tid.

The November 2018 issue of the Journal of the American Medical Association published that fewer than 10% of people with allergies to penicillins are actually allergic. A true anaphylactic reaction includes hypotension, laryngeal edema, wheezing, angioedema, or urticaria. Among those with true allergic reaction, 80% can lose this sensitivity within 10 years. Most often, people consider stomach upset as an allergy to this drug. Sorting out these reactions is important so we can consider using these antibiotics instead of misclassifying our patients.

Fluoroquinolones are broad spectrum antibiotics that are concentration dependent bactericidal agents. They are currently the most popular topical antibiotic used for treatment of ocular infections due to their safety, penetration into the aqueous and vitreous, and long duration of tear concentration. Oral fluoroquinolones are typically used for serious bacterial infections such as endophthalmitis, severe bacterial keratitis, and prophylactic agents in trauma. These antibiotics are also classified by generation:

Second generation fluoroquinolones hold well against gram-negative bacteria, but are not used as much due to their high rate of resistance versus gram-positive microbes. You’ll see ciprofloxacin used commonly to combat Pseudomonas sp. Ofloxacin has a widely available generic which is why it is an inexpensive option for bacterial conjunctivitis. The third and fourth generation fluoroquinolones are typically more popular due to their potency against gram-positive AND gram-negative bacteria. Unfortunately, there is also increased bacterial resistance against the higher generations. Besivance is a unique suspension that has a broad spectrum of coverage, administered tid for five days for acute bacterial conjunctivitis in adults and children. For severe infections such as bacterial keratitis, it is safe to give as a loading dose.

They are bacteriostatic with a spectrum of activity against gram-positive cocci and bacilli, Mycoplasma, Borrelia, Chlamydia, and Rickettsia. It is a great alternative to penicillin and cephalosporin hypersensitivity. The newer macrolides such as azithromycin and clarithromycin also have better tolerance against H. influenzae.

Erythromycin ointment is commonly used for blepharitis. It has a very good safety profile but poor resistance. Erythromycin can also be used in chlamydial infections caused by gram-positive organisms. Conjunctivitis in a newborn can be treated with oral erythromycin suspension at 50 mg/kg per day divided into four doses for at least 2 weeks. You can also use it as an alternative to tetracyclines to treat phlyctenular keratoconjunctivitis.

This medication has a high tissue penetration which makes it an excellent choice for sexually transmitted infections and it has shown success with relieving the signs and symptoms of meibomian gland dysfunction (MGD). It is less effective against gram-positive than erythromycin, but useful against H.influenzae, atypical Mycobacteria, and Toxoplasma gondii.

A single 1g dose of azithromycin is effective for treatment of chlamydial conjunctivitis and trachoma in adults, typically prescribed as two 500mg tablets.

You’re probably familiar with “Z-pak,” a pack of 5 pills prescribed two 250mg on day one followed by one 250mg tablet each day for 4 days. This antibiotic has excellent coverage even after its short course.

Topical azithromycin can also be used for conjunctivitis. Azasite is popular not only for bacterial conjunctivitis but also to stabilize meibomian gland expression.

This antibiotic is actually derived from erythromycin. It is used for systemic treatment of chronic endophthalmitis, and infectious keratitis post LASIK.

These are also bacteriostatic with a spectrum of activity against Chlamydia, Rickettsia, Mycoplasma, and Spirochetes. It is toxic for children under the age of 12, and pregnant/nursing women. But, they are a good option in patients with allergies to penicillin and sulfa. In addition to their antibiotic properties, they also inhibit corneal matrix metalloproteinase-9 (MMP-9) which improves corneal epithelium irregularity, MGD, and ocular rosacea associated blepharitis and tear film stability. These antibiotics are divided based on the duration of action with doxycycline being preferred due to better absorption and long action. Due to it’s dichotomous nature, you can prescribe it as an anti-infective at high dosage or an anti-inflammatory at low dosage. For chronic MGD, you can dose it as 50mg once or twice a day for a few weeks, and then maintain it at 50mg daily for subsequent weeks. As an alternative to cephalosporin, you can dose at 100mg bid for one week for an internal hordeolum. Like I mentioned above, it’s also a great medication for recurrent corneal erosions in conjunction with topical corticosteroid. Doxycycline hyclate and doxycycline monohydrate are well tolerated, but monohydrate is preferred.

Bacitracin and Polymyxin belong in this class, but they differ in their function and antimicrobial spectrum. Bacitracin is bacteriostatic in action, but may reach -cidal levels based on the concentration and susceptibility to the organism. It is strictly against gram-positive cocci, and commonly used in staphylococcal blepharitis cases. It is often used in combination with other antibiotics (ex. polysporin, see below). You may also use it in ointment form overnight for severe ulcerative keratitis. Although, normally a combination of fourth generation quinolones and polysporin provide broader coverage.

On the other hand, polymyxin B is a bactericidal agent which counteracts gram-negative organisms, P. aeruginosa in particular. Due to systemic toxicity, it is mostly used as a topical drug.

These are bactericidal agents that work on gram-positive cocci and bacilli bacteria. They have little effect on gram-negative species. Vancomycin falls under this category. Because of its toxicity levels, it’s typically only used for infections caused by MRSA and penicillin-resistant S. pneumoniae. It is most commonly used for treatment of endophthalmitis after cataract surgery, infectious cavernous sinus thrombosis, open globe, etc.

These bactericidal agents include gentamicin, tobramycin, neomycin, and amikacin. Due to their poor absorption in the gastrointestinal tract, systemic agents are given parenterally. We come across them topically, although with a poor reputation of being coreneotoxic. This can be reduced by prescribing for a shorter duration. They are broad spectrum antibiotics, including S. aureus, and gram-negative bacteria including Pseudomonas, Proteus, Klebsiella, E. coli, Enterobacter, and Serratia. They work poorly against anaerobes, and streptococci, enterococci, and MRSA. Because of this, fluoroquinolones are more often used. These antibiotics can be combined with Polymyxin B or another drug to expand bacterial coverage against gram-negative organisms (ex. Neosporin - polymyxin B/neomycin/bacitracin).

You may also see them combined with steroids to eradicate bacteria, and decrease conjunctival hyperemia.

This review is a basic outline to understand the different kinds of antibiotics available, their classifications, and some clinical settings to apply them under. It is important to heed dosing, contraindications, adverse and drug reactions along with your patient criteria when prescribing. Taking careful medical history is important. You may also consider consulting with PCPs or pharmacists. There are many apps available at our fingerprints to access information. I personally use Epocrates on my iPhone. You can also reference prescribing methods in Wills Eye Manual, Sanford Guide to Antimicrobial Therapy, and Monthly Prescribing Reference. 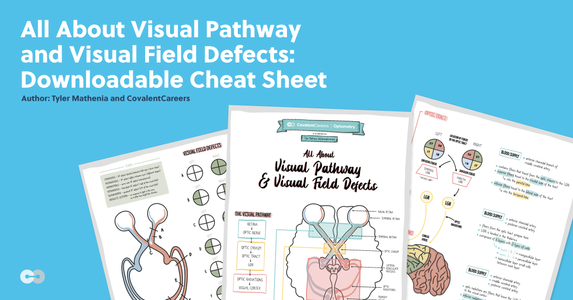 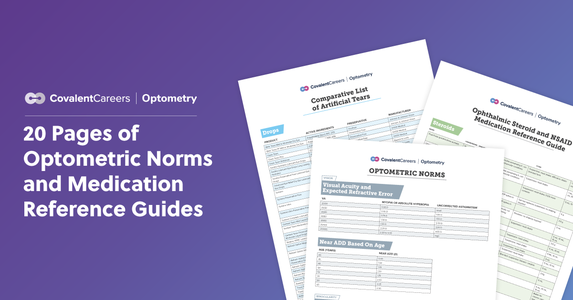 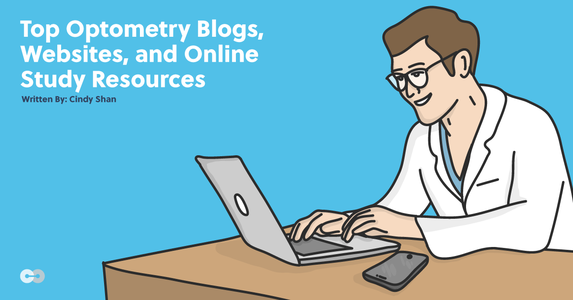