In this course, explore the recent research on the correlation between metabolic syndrome, diabetes mellitus (DM) and primary open angle glaucoma.

The correlation between metabolic syndrome, diabetes mellitus (DM) and primary open angle glaucoma has largely gone unscrutinized until the past decade of research. Numerous systematic reviews and meta-analyses have now linked metabolic dysfunction as a significant risk factor for developing primary open angle glaucoma (POAG).2-14 This has significant implications for managing our POAG patients who may also have metabolic syndrome or type 2 diabetes.

While some practitioners may refute the link between metabolic syndrome, diabetes and open angle glaucoma, the American Academy of Ophthalmology agrees that type 2 diabetes is a risk factor for POAG.1 Some commonly used POAG risk calculators are also starting to include diabetes in their calculations of glaucoma risk assessment. Eye care practitioners must account for this link when it comes to risk assessment and management of their POAG patients. It is also important to keep this in mind when working up glaucoma suspects. Could we potentially reduce the disease burden of glaucomatous vision loss by also addressing metabolic dysfunction in these patients?

In this course we’ll review the current literature and various mechanisms by which metabolic dysfunction can increase a patient’s risk for developing POAG. As new information is revealed, the clinical management of POAG, in the context of metabolic dysfunction, may change tremendously.

Before taking the course, test your knowledge!

Take the quiz and test your knowledge of metabolic risk factors in open angle glaucoma!

The glaucomas are a class of ocular disease characterized by progressive optic nerve degeneration with subsequent loss in retinal nerve fiber layer (RNFL) and retinal ganglion cells (RGCs). It is the leading cause of irreversible blindness worldwide with over 75 million people being affected.20 This number is expected to exceed 111 million by year 2040.20

In general, primary open angle glaucoma is the most common type of glaucoma that practitioners encounter and manage. By having a thorough understanding of the pathophysiology and various treatment options for POAG, we are able to better educate and manage these patients.

Systemic conditions leading to ocular ischemia are also thought to be implicated in the pathogenesis and progression of POAG. These include metabolic/cardiovascular diseases,2-14 smoking,16-19 and sleep apnea. The risk for developing glaucoma is almost 4 times higher in adults who have had diabetes for over 5 years.4 Patients with metabolic syndrome or prediabetes also have an increased risk.

At this time, there is no definitive cure for glaucoma; however, when caught early in the disease process, most practitioners are able to preserve their patients' vision and quality of life. 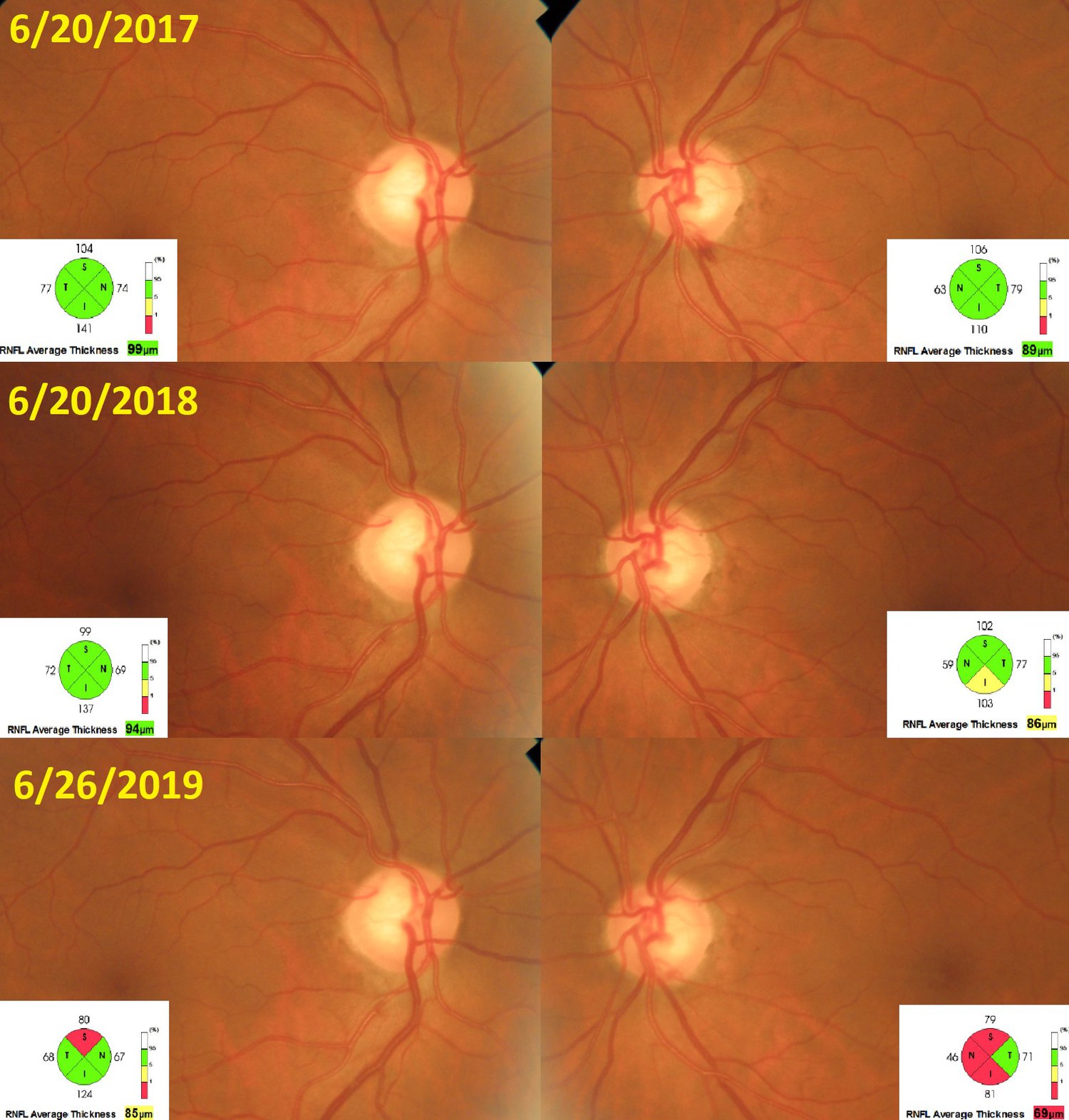 There are numerous proposed mechanisms in the literature that attempt to explain how the physiological changes in metabolic syndrome/DM increase the risk of developing glaucoma. The link between the two diseases is multifactorial. A compromise in trabecular meshwork outflow facility,8 acceleration of retinal apoptosis,9-11,21-25 and increased levels of oxidative stress and inflammation within the retina7,11,23,26-28 are all changes that can occur in the context of chronically elevated blood glucose.

Patients with diabetes or metabolic syndrome have been shown to have higher IOP readings on average, over 10% higher.2 Diabetics can have elevated levels of glucose in the aqueous humor and trabecular meshwork (TM), over twice that of non-diabetics.8 Intraocular hyperglycemia can upregulate the expression of fibronectin proteins in the anterior chamber. The accumulation of this protein is thought to reduce aqueous outflow, thus increasing IOP. Increased fibronectin production is also thought to play a role in the steroid-induced IOP spike.

There is also a correlation between ocular hypertension (OHTN) and metabolic syndrome. A direct relationship has been shown between the severity of metabolic syndrome and IOP.29 The prevalence of OHTN in one study was almost double the rate in the group with metabolic syndrome, 5.56% versus 2.98% in the normal group.29 Aside from the clogged TM theory, it is also thought that sympathetic hyperactivation can also raise IOP in individuals with diabetes or metabolic syndrome.

Several studies examining the retinal nerve fiber layer (RNFL) in patients with diabetes have found significantly higher rates of neural apoptosis and loss in ganglion cell count. The diabetic RNFL on average is about 7 to 12 microns thinner when compared to non-diabetic patients.9,10,21 These findings have been shown to occur within the first 7 years from the onset of diabetes (in both type 1 and type 2 DM), even before any signs of retinopathy have occurred. Both animal and human studies have also shown a significant increase in retinal tissue undergoing DNA fragmentation and apoptosis.11,14 Several proposed mechanisms for these findings are retinal nonperfusion,10 accumulation of advanced glycation end products,10,23-25 and glutamate toxicity.11,27,28

It is no surprise that detrimental changes occur to the optic nerve head structure in patients who undergo panretinal photocoagulation (PRP) as treatment for diabetic retinopathy. After PRP treatment, up to 30% of the retina is destroyed in order to increase oxygen supply to the inner retina via the choroid. A decrease in retinal oxygen demand also results. Despite advances in anti-VEGF therapy, PRP remains a common treatment for proliferative retinopathy as well as with severe nonproliferative cases, per the Early Treatment of Diabetic Retinopathy study (ETDRS). PRP can reduce the risk of severe vision loss by 50% in these patients.30

Within the first year after PRP treatment, several structural and functional changes occur to the optic nerve that can mimic glaucomatous optic neuropathy. There is an average loss in nerve fiber layer (RNFL) of about 4 microns, with some reports showing superior or inferior sectoral loss of over 10 microns. The average annual loss in RNFL for a healthy adult is about 0.16 microns per year.30 Vertical cup-to-disc ratio is also increased by 0.05 c/d, usually with some form of atrophy or pallor to the neuroretinal rim.21,30,31 An expansion of scarring throughout the posterior pole can occur up to 4 years after the procedure.32

These findings may add an additional layer of complexity when working patients up for glaucoma or when monitoring glaucoma patients who must undergo PRP treatment. Clinicians may find themselves asking if the patient’s RNFL thinning is related to glaucoma or if it is just a side effect of the PRP laser. Typically, progressive RNFL thinning from glaucoma will continue years after a patient has had PRP treatment and should be managed with IOP reduction and blood sugar control.

Figure 2: Bilateral PRP scarring with early optic atrophy in a 53 y/o Male with history of proliferative diabetic retinopathy. Up to 30% of these patients may fail their binocular visual field requirements for a driver’s license after bilateral PRP is performed.32

The accumulation of advanced glycation end products (AGE) in the eye is also thought to contribute to an acceleration in nerve fiber loss in glaucoma. Diabetics have been shown to have significantly more endogenous AGE production vs. non diabetics.7,23,26,33 These molecules accumulate in the blood and tissues and are responsible for an acceleration of the aging process including increased oxidative stress and inflammation.25 In glaucoma, increased ocular AGE accumulation is thought to compromise the ability of the optic nerve/cribriform plates to bear the strain of diurnal fluctuations in IOP.23 They are also thought to compromise ocular microcirculation.

AGE form as a part of normal metabolism of food in the body, and are highly dependent on the food’s glucose concentration as well as the cooking temperature/technique used. AGE accumulation in the body also increases with compromised renal function, which is common in diabetes.

To further reinforce the idea of increased retinal apoptosis occurring in diabetes, there are dozens of studies looking at multifocal electroretinogram (ERG) and visual evoked potential (VEP) responses in type 1 & type 2 diabetes which consistently show abnormal findings in the diabetic retina.35-37 There is a direct correlation between duration of diabetes, HbA1c control, severity of retinopathy and the increase in response latency on ERG testing. Diabetics have been shown to have a delayed ERG response two to four times that of normals, which also can correlate with visual field defects occurring independent of retinopathy, glaucoma or panretinal photocoagulation.35

One study showed an 8 to 10% increase in VEP latency in diabetics versus controls, showing a compromise in the visual pathway in diabetics.15 It is debatable whether performing these diagnostic tests can predict which diabetic patients are more likely to develop future microvascular complications or neurodegenerative changes. These tests are not always easily accessible and may be costly and impractical in most clinical settings.

Management of POAG with DM

As practitioners on the front lines of ocular disease management, it is important to have an arsenal of different management strategies in our clinical toolbox. Currently, reducing intraocular pressure is the only current evidence-based treatment and modifiable risk factor for open angle glaucoma. However, given the growing body of evidence linking DM to POAG, eye care providers may be able to leverage this association in caring for these patients.

The treatment protocol for patients with POAG in the context of diabetes or metabolic syndrome needs to be multifaceted.

Recruiting other medical subspecialties and referring patients when necessary may also be vital in a comprehensive glaucoma management plan. These can include PCPs, dieticians, and behavioral health counselors to help address other comorbidities. Also, optometrists shouldn’t underestimate the impact that the “lifestyle” conversation can have on these patients. While they may not expect this coming from their eye doctor, it can be a great way to reinforce what they’ve already been told by other providers or to address any unanswered questions they may have regarding their diabetes management.

While reduction in IOP continues to be the mainstay of glaucoma treatment, addressing concomitant metabolic disease must be included in a comprehensive management plan. There is a strong, multifactorial link between diabetes and an increased risk of developing primary open angle glaucoma. With the significant increase in incidence of diabetes worldwide, eye care providers will likely see a rise in new cases of glaucoma attributed to metabolic dysfunction. As new research continues to unfold, the clinical management of POAG in the context of diabetes and metabolic syndrome may change tremendously.